Another 8 Practice Drills for EFL Students 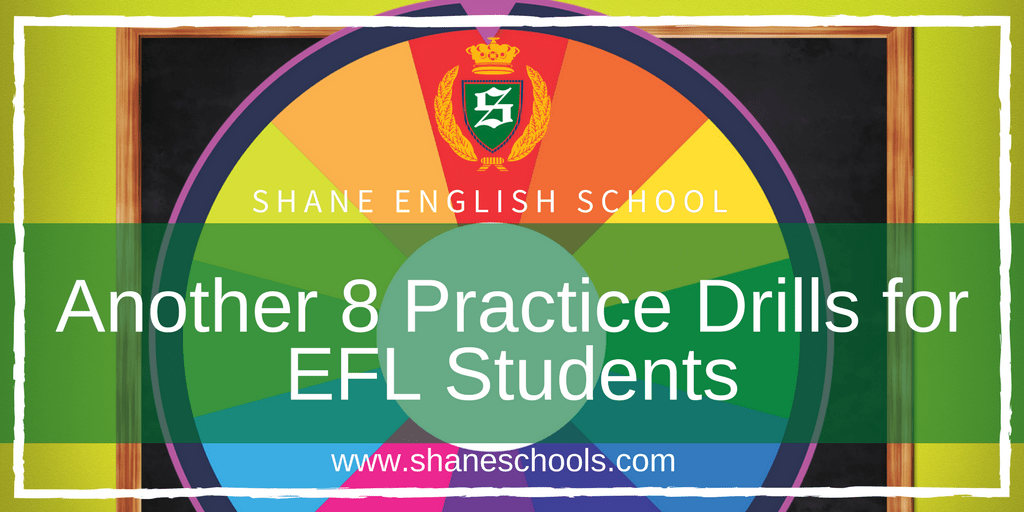 Is there such a thing as too many EFL games? We don’t think so. Anything that gets the students engaged and learning is fair game. Here’s another 8 activities that you can add to your regular rotation.

We have another set of EFL practice drills to liven up your English lessons. These games range from the simple to the complex, but all of them are fun and useful in the right situation. Try a few out and let us know how it went!

Need a refresher on the practice phase of the PPP method?

You will need some flashcards or word prompts for this drill. Small flashcards are preferable since you will be turning the cards over quickly. Put the students into groups of 3 or 4. Each team then tries to work through as many cards as possible in an allotted time, turning them over and saying the words. Thirty seconds to a minute is generally enough. The team that gets through the most flashcards is the winner. An idea is to get all the teams to do it in the same thirty seconds. Nominate one of the opposing team members to be the ‘card turner’ (this should overcome potential cheating), then add up the scores and change the card turner. Your role as the teacher is to then be the time-keeper and to monitor closely.

Spin the Bottle/Wheel of Fortune

Create a large ‘wheel’ with different numbers to represent different points and number of drills. Opposing teams spin the bottle and say the target language the a certain number of times indicated by their spin. Remember to put forfeits in the wheel, too.

Alternatively, you could draw the wheel on the whiteboard and use dice to moved a magnet around its different numbers and forfeits.

Split the class into teams. Each member of the team is numbered. (There should be two number 1s, two number 2s and so on.) Drill the TL and call the number out. The students with that number rush to the center of the class and stare at each other. They must stare into the eyes. The first student to laugh, smile, etc. will lose.

Split the class into two teams. Each member of each team is numbered. (There should be two number 1s, two number 2s and so on.) Drill with a simple say-and-repeat activity and call the number out. The students with that number have to stand up and ‘shoot’ the other ‘gunfighter’. Do a couple of these in a silly order so all students are ready to go. Or you could just say GO! And everyone shoots – winners put up their hands.

The teacher faces the whiteboard and holds up a flashcard prompt so that everyone can see it. The students walk around a chair in the middle of the room chanting the target language. The teacher then quickly turns around and the students freeze. If the teacher sees anyone move then he/she awards a point to the other team. The trick to this drill is to ‘ban’ movement/laughter or try to make them laugh and so create a lot of fun.

Line the students up in a horizontal line facing a big box. Give them 3 balls/blocks each and tell them to throw them into the box. For each ball in the box, they drill the target language once. If they get less than 4 then they have to say it ten times!

Students stand in the center of the room and run to the north/south/east/west of the room. If you hold the f/c out in front of you, they run north. Towards you, they run south etc. When they get to the end they say the target language three times. Good for the energetic students. To make it more fun, trick the students by pretending to hold the F/C east, then quickly change to another direction.

Need even more drilling activities? You can find some here, here, or here.