Another 7 Drills for Language Learners 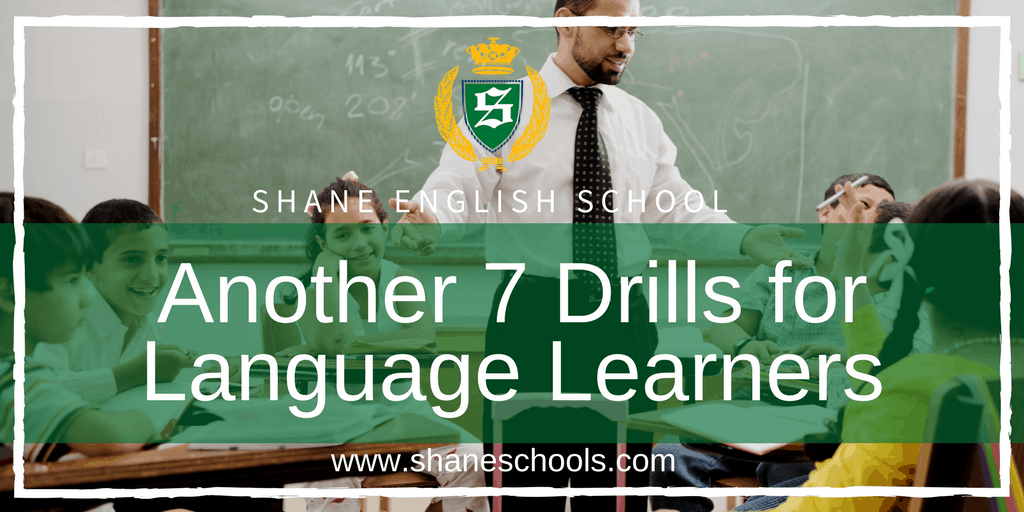 Make sure to use a variety of drills for language learners. Here are a few more handy drills to add to your repertoire to keep your students happy, engaged, and progressing.

Drills for language learners make up a large part of most EFL teachers’ days and with good reason. The structured activities give students a solid framework for target language, and familiarity means less time explaining activities and more time teaching. However, endless repetition of the same 2 or 3 activities quickly loses the students’ interest, so it’s important to have several a number of activities in the rotation. Here are 7 (more) language drills for EFL learners.

This idea is a variation of the Stand-up/Sit-down drill, which does not involve the danger of children braining themselves on chairs! It is suitable for most levels.

The game needs close monitoring to make certain that all the children are saying the language.  The teacher should not drop their hand until they are satisfied that they have full class involvement and that the children are drilling well.

The class is split into two halves, and each side is assigned the question or answer form of the target language, which through (substituted) prompts from the teacher, they will ask and answer each other. This is a useful pre-cursor to pair-work since it practices both question and answer without the teacher but still gives the students the confidence of ‘safety-in-numbers’.

Have one team shout out the question, and the other shout out the answer.  This is repeated until the teacher is happy with the drilling.  The two teams then line up facing each other.  Each student plays ‘paper scissors stone with the student opposite them.  The losers sit down.  The winners are awarded a team point.  This process is repeated for the next sentence/item of vocabulary.

The students stand or sit in a circle. The first student is given a prompt, such as a flashcard, and makes a target statement about it. They pass it on to the next student who repeats the statement. This continues around the circle. Once the flashcard has left moved past the first couple of students, another flashcard can be fed in. The teacher should be moving around the circle monitoring as the flashcards are passed around. Therefore it will be necessary to assess how the flashcards are fed in. The teaching assistant could be used, or the first student can pick up the next one from the pile once the subsequent flashcard has moved on sufficiently.

Similar to the chain drill except one prompt is sent one way around the circle, while another is sent in the opposite direction. Obviously, there will be a point where a student will be trying to pass it to his neighbour, and his neighbour will be trying to pass it to them. This does add an element of chaos, but once the students become familiar with the drill, this can be quite fun. This drill again will need careful monitoring to run smoothly. For example, if the cards start building up on one student the teacher will need to take some of the cards and re-distribute them elsewhere in the circle.

Note: Both the chain drill and the dribble drill are useful when a question-answer structure is to be practised, whereby one student asks a question about the prompt to his/her neighbour, who follows suit as the prompt is passed around the circle.

This is similar to a chain drill and a dribble drill, except that the order of the students is more varied and less predictable. One student is given a prompt or answers a question, and they then choose any other student to go next using a prompt or question. This continues until all students in the circle have used the target language. It is often useful if the first student is given a ball, and then, having made their statement, they throw it on to the next chosen student, commonly accompanied by a question-form. Younger students, with less developed motor skills, could roll the ball along the floor.

Variation: students pass two different objects (e.g., coloured beanbags) around the room to music. When the music stops, the student left holding one of the objects will ask the TL question-form to the student with the other object.

Variation: this entails providing a challenging physical element that students react well to. The class as a whole (although teams could be used too) are given three ‘lives’, and then the Death Ball drill is carried out. Should any of the students drop the ball, the class/team loses a ‘life’. There will usually be a fun forfeit should all three ‘lives’ be lost.

Similar to the Death Ball drill, this is a good activity for checking individuals and can be done very quickly. It usually works best when you have a question and an answer. The teacher’s role is to nominate which student will ask the question and which will answer. Mix it up and so don’t nominate in a uniform manner. The teacher can do this for 1 or 2 minutes and in that time will get to hear every student in the class, probably more than once. At times the teacher will need some picture prompt for the question and answer, but the students could also be given flashcards which will dictate the question asked and the answer given.

The important thing with this is to have some pace to it. When nominating the students, the teacher can point to the student concerned and say ‘Q’ (meaning they will ask the question) and ‘A’ (meaning they will answer). A short prompt like this will increase the tempo and keep the momentum up. If you say something like “Johnny can you ask the question, and Willy, can you answer?” then the overall pace will fall, and it will not be as effective! One idea when using this is to see how many questions and answers the students can do in 30 seconds or a minute, with some sort of reward or incentive being set for a certain target number.