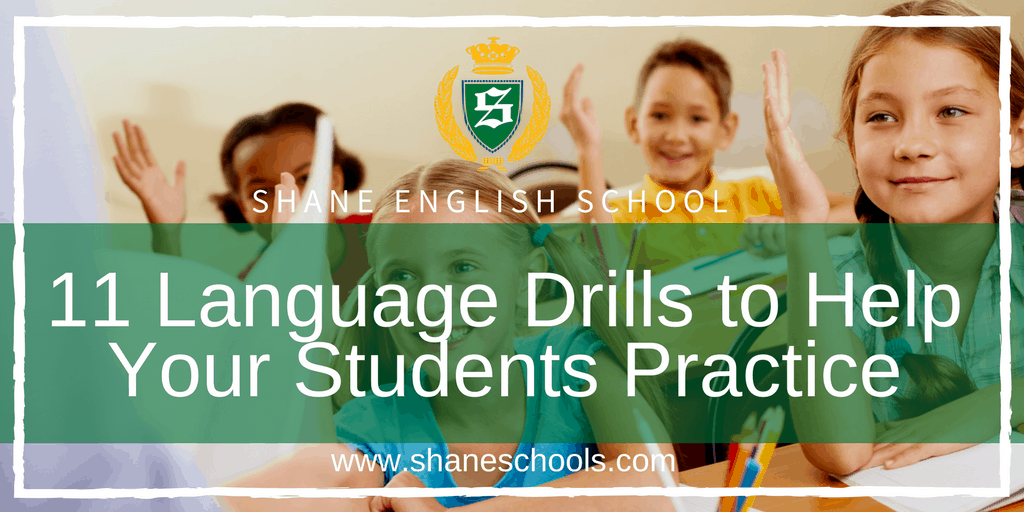 Language drills do not have to be a dry or static stage of the lesson, employing mere parrot-fashion repetition. Instead, by utilising a variety of drills, and using thought and imagination, it should be fun.

The practise stage of a lesson should be a gradual progression from controlled teacher-student drills to freer student-teacher drills that give them a chance to get to grips with the language being developed and really internalise it. Then students can move on to even freer drills – student-student, students-teacher, or students-student – that enable the students to interact with each other and rely less on the teacher. Essentially, language drills provide a clear model for the students and will thus enable them to use the language both accurately and with confidence. Therefore, think carefully when planning a lesson about what drills to employ (in relation to the demands of the target language) and in what order. Also, remember to always drill both the answer and question forms before combining them together.

Note: Most of the drills outlined below can be adapted so as to change the interaction patterns. They can also change the role of the teacher, or whether the activity is used to practice the vocabulary, answer form, question form, or question and answer form.

These drills are ideal for the practise phase of the PPP method.

The students chant the target language chorally, repeating the teacher’s model three times. The teacher carefully monitors the group (remembering not to chant with them, but listening instead!)

The teacher isolates individuals through gestures. The student then repeats the teacher’s model on their own. This is especially useful for picking out those students with pronunciation problems. Try not to go around the class in a circle; instead pick students in an unpredictable, random order. It is also often preferable to isolate stronger students first before concentrating on those with any problems, bearing in mind sensitivities regarding ability and confidence.

For this drill, the students line up in single file in front of the board, which is divided into vertical ‘strips’. Each strips contains different language prompts. The teacher will supply the model that the class must chant chorally as they jump in unison however many places to the left or right in order to face the corresponding prompt.

This is very useful for students who are having problems pronouncing long words. The teacher holds up a certain number of fingers, relating to the number of syllables in the word (e.g. four fingers for ‘recreation’). Then he or she will isolate each syllable sound, linking it to each finger (‘re-cre-a-tion’), and build up the word, either from the first syllable onwards, or from the last syllable backwards (Always remember to consider the students’ location, and so move along your fingers from your right to left, which is their left to right – unless, of course, you are moving back from the end of the word). In a similar vein, younger learners often respond well to a certain ‘dance move’ being linked to each syllable, producing a fun dance routine tied intrinsically to the item of vocab, often helping with intonation and rhythm.

This technique is useful for long sentences or sentences that the students may be having trouble with. Write the sentence on the board. When drilling the sentence, move from the end of the sentence and build it up word by word until you get to the beginning.

Generally, it’s a good idea to start wiping the words off the board as you go along. The reason for doing this is because your ultimate aim is to turn it back into an oral drill.

This can be particularly useful to encourage the elimination of superfluous vowel sounds at the end of words (e.g. ‘orange-ee’, ‘book-er’) These are common in some regions as hold-overs from students’ mother tongue, especially Mandarin speakers.

The students stand in front of their chairs. The teacher gives them a prompt (such as a flash card), and the students repeat – or say – the target language three times and then quickly sit down. The last student to sit down loses a point for their team (or must answer a penalty question).

If the students tend to garble the language in their haste to sit down, the teacher can orchestrate the speed of the drill through gesture: the teacher prompts the target language and holds up one finger, prompts the students say the item, and this continues with two then three fingers. Finally, the teacher holds his/her hands up, with the palms down, and drops them downwards indicating that the students can sit.

You need two teams, two hammers, and two sets of flashcards for the target language. Number the students in each team. Put one set of flashcards on the floor between the two teams.  Put one hammer on the floor near each team.  Hold up a flashcard from the second set and elicit the target language from the students.  The students then drill the language.  They continue to repeat the language as a group, until the teacher is happy with the drilling.

The teacher then shouts out a number.  The student from each team with this number then races to pick up the hammer and whack the appropriate flash card.  The winner’s team produces the target language and then is awarded a point.

The students chant one item of the target language until the teacher gives a prompt (e.g. a new keyword or flashcard) and they must change what they are saying to incorporate the new language item. This could entail subject or possessive pronouns (or both), for example:

Or perhaps different items of vocab:

This drill is especially valuable for practising language with complicated grammatical or gender-based demands.

The teacher puts flashcards or keyword cards on the board prompting target language to be drilled and numbers them from 1 to 6 (or 2 to 12 if two dice are used). He/she then gives one of the students a die, which is rolled so that the number that comes up dictates which item is to be drilled. Then another student rolls the die to dictate how many times the word is drilled. It is often fun to accompany this kind of drilling with total physical response (TPR).

If the students have to say the target language 5 times, they can be awarded 5 points for this.  Have a target number of points to reach, say 25.  When a team reaches or passes this point, they are the winner.