How to Encourage Shy Students in the TEFL Classroom 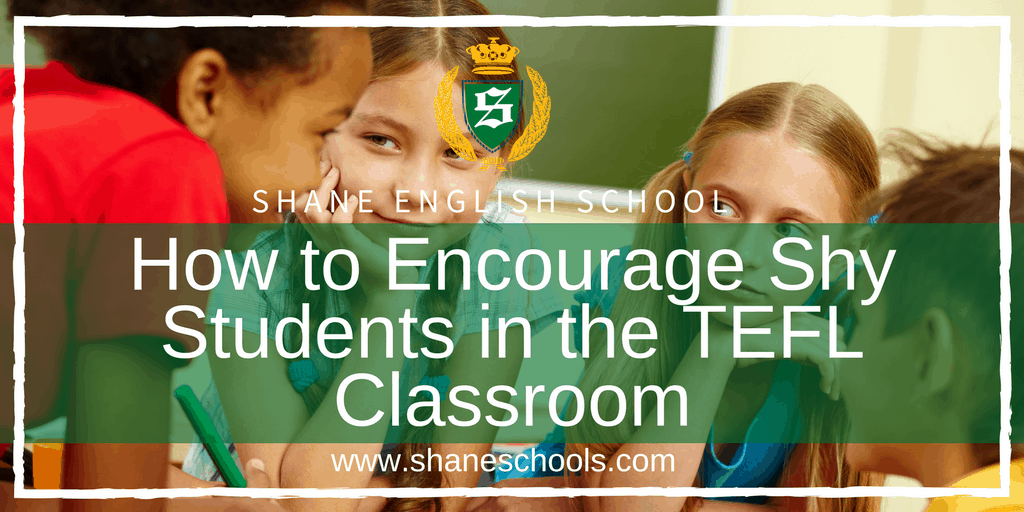 Whether your language classroom has five students or fifty, the chances are that you have at least one shy learner who finds it difficult to speak. Perhaps this student is just a little bit shy and isn’t keen on taking the lead, or perhaps they suffer from a serious shyness problem and won’t open their mouths at all. Having students like this in a TEFL classroom can be daunting for teachers – calling on introverted students can result in long, painful silences that are awkward for everyone involved. But don’t worry, there are hints at hand to get even the shyest students participating in class.

Shy students often have friends or classmates who they use as human shields – people that they hope to hide behind so you won’t ask them any questions. When more talkative students are keen to take the spotlight, it’s easy for shy students to fade away into the background and stop participating at all. One way to get around this is to carefully plan pair and group work for maximum participation of all students.

Mixed Confidence Groups – By putting students into groups with learners of different confidence abilities (for example, a pair with one shy student and one outgoing student) the more outgoing students can sometimes have a positive effect on the shy ones. Particularly in pair work or small groups of up to four or five students, the more confident students can help to draw students out of their shells and get them working together.

Matched Confidence Groups – On the other hand, by placing students of similar confidence abilities together, you are effectively forcing someone to step out of their comfort zone. Let’s say you have a group project where the group has to research a topic and, at the end, one member of the group presents their findings. If your group consists purely of shy students who would never normally chose to do the presenting, then someone will have to step up and fill those shoes. Given the opportunity to do what they would normally back out of, this can be a great chance for shy students to shine.

Random Groups – By picking groups or partners randomly, perhaps with names out of a hat, you are leaving the groupings to fate and this can, on occasion, provide some interesting results. For example, students who are perhaps not particularly friends and wouldn’t normally work together might find that, when they are thrown together in a random grouping, they make a really good team.

Sometimes a shy student doesn’t want to participate because they are worried what other people will think of their opinions. This is particularly the case in East Asian countries where students are worried about ‘losing face’ and don’t want their peers to judge them. If you are trying to facilitate an activity where students give their honest, personal opinion, but you want the shy students to get involved, try using some activities where the student’s answers are anonymous.

Wear a Mask – If students are worried about expressing personal opinions, try an ice-breaker where they give the opinions of someone else. Give them name cards and tell them who they are ‘playing’ and what their characters’ opinions are. This is a good warmer to prime for students being more open to revealing their own opinions. With younger learners, getting them to literally wear masks adds a fun element.

Snowball – Rather than asking students to say their opinions aloud to the whole class, get them to write their answers on little slips of paper which they can crumple into snowballs. Then set a timer for 10 seconds, during which time the students can pelt each other with these harmless paper snowballs. (Teens love this game!) After 10 seconds, they pick up the snowball nearest them, unravel it and read the opinion of their classmate without anyone knowing who wrote it. A risk-free way for students to express their true feelings.

Calling on Them… Second

Targeting shy students to make them answer questions may seem like a good way to force them to speak, but exerting your authority in such a direct way can make shy students recede even further. A good way to get around this is to get into the habit of calling on shy students second. When you ask the question, glance in the direction of the shy student to give them that initial fear that they’re going to be called upon – this will kick-start them into thinking of answers and preparing for that dreaded moment when you say their name. Instead, ask a more confident student – this will give the shy student a feeling of relief, and gives them more time for their brain to continue working on their own answer to the question, even though they think they now don’t need it. When you then turn around and ask for their opinion too, they won’t feel so nervous as when they had the initial fear of being asked.

Very few ‘shy’ students are so timid that they cannot talk at all – most can be persuaded to come out of their shells, and with the correct support, their confidence will grow over time. Don’t push them too hard, give them time, but don’t be too soft on them either and over-praise them when they do contribute. Given the opportunity, all students want the opportunity to shine, they just go about it in different ways.

Celia Jenkins is an EFL educator and freelance writer specialising in travel and children’s writing. She has taught English in China, Japan, and the UK.