Adults Want to Have Fun, Too! – Games for Beginners 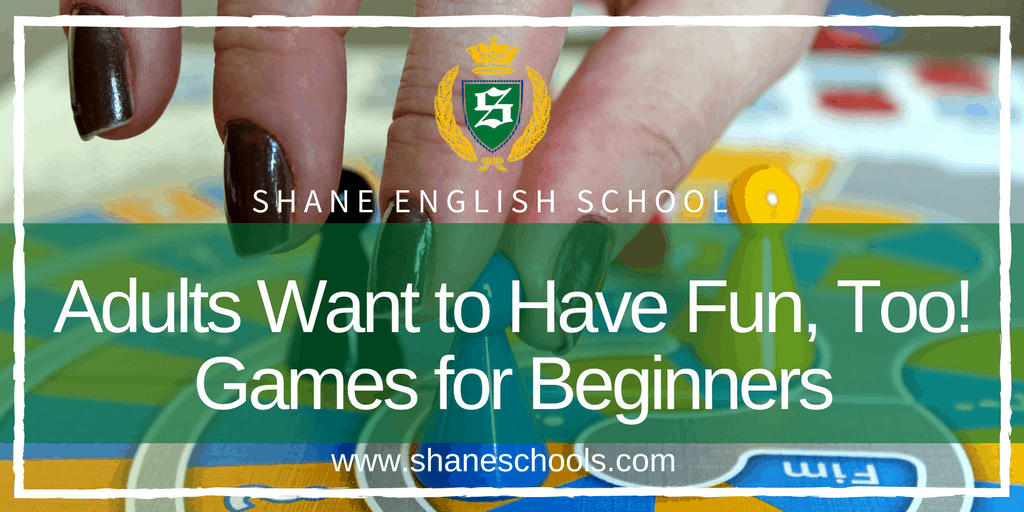 What do you think teaching an adult class is like? Is it dry, stuffy, and dull? It doesn’t have to be! Adults benefit from fun (and even games) as much as younger learners.

Kids are easy. Sing a few songs, act silly, play lots of competitive games, and voila! Of course, that’s oversimplifying things greatly, but it is true that with adults you need to think outside of the box to have fun. This is especially the case for learners at an elementary level.

If you don’t speak your students’ native tongue, beginners can be a challenge. Even if you do have some background knowledge of their first language, it’s not a good idea to rely on it too much. With adult beginners, it’s hard to drift from the temptation of doing exercise after exercise since not much can be produced at this stage. Games are the way around this, and we’re here to share a few with you.

Teaching adults can be a very different experience: 3 Differences between Teaching Children and Adults

This is a great game I picked up from one of my CELTA tutors. You’ll find this can be adapted to many different aspects, but I like to use it with acronyms to practice letters.

To create: Get some index cards, or make your own out of paper. Label the top half of the card to “I hear” and the bottom half “I say”. Under the “I hear” title write an acronym, for example VIP. Under the “I say” heading write a different acronym such as DVD. For the next card, you’ll start with DVD and end with another acronym. Eventually, they will loop around so that your last card will end with VIP.

Students listen to their peers and when they hear the acronym under “I hear”, they then say the one under “I say”. This can be a lot of fun with a bigger class and requires good listening and pronunciation.

Shouting across the Room

Although this one isn’t exactly a game per say, students will still get a kick out of it after you’ve established a good amount of rapport. Choose a speaking activity from the textbook you are using with the class, or make up your own simple role-play dialogue. Pair students together, but with partners that are across the room from them. They have to remain seated and carry out the dialogue or exercise. Students will have to raise their voices to be heard over each other, generating laughs and boosting confidences!

After teaching numbers, you’ll need an activity to practice them. The standard is usually working with phone numbers, but here’s something that’s a little more exciting. Have students get into small groups of threes or fours. Give each group a deck of cards and one die.

Students deal the cards out evenly and take turns rolling the die. Whatever number it lands on is the number of cards the student should place face up on the table. He or she must then say the number. You’ll need to remove all the face cards before playing, or you could make it more complicated by assigning them numbers, such as Jack=0, Queen=1, etc.

Starting at the End

This one is actually quite popular and even has an official name, but I can’t remember it. (Another of our teachers called it Banana-Art-Teacher-Robot. You’ll figure out why in a moment.) It’s done quite a bit with kids and teens, but it’s also very suitable for adults. Use it as a warmer, cooler, a break between content, or when you have some extra time.

Have students make two lines in front of the board so that each line corresponds to half of the board. The first person in each line goes up to the board and writes a word, then hands the chalk or marker off to the next person on their team. That team member must write a word that begins with the last letter of the previous word. And so the chain continues. You’ll be surprised at the friendly competitiveness this brings out amongst your adult learners. And you may get word strings like this: “Banana art teacher robot…”

Once they’ve learned a bit more vocabulary, you can challenge them to write only nouns, verbs, or adjectives. Make sure they have enough in their arsenal before setting them loose or teams will be at a standstill.

There are a tonne of online resources for supplemental lesson material, as you are probably already well aware of. Make good use of it! There are some great board games for beginners out there. Adults really enjoy the chance to play them, since it’s not something they normally do. Just make sure the game board doesn’t look too childish. A Google search of the topic or point you want to practice, plus “board game” will usually yield some good results (ex. “plurals board game”).

Hopefully, you’ll have found some inspiration with these game ideas and will try them out. Here are some tips for game success in an adult classroom so you aren’t left with blank stares and serious faces.

So there you have it. There’s no need to “gamify” everything, but a little fun never hurt anyone!

Want to know why we use games? Why Do We Play EFL Games in Class?

Yvette Smith is an EFL language teacher and freelance writer who has lived and taught in various countries. She is currently based in Vietnam.