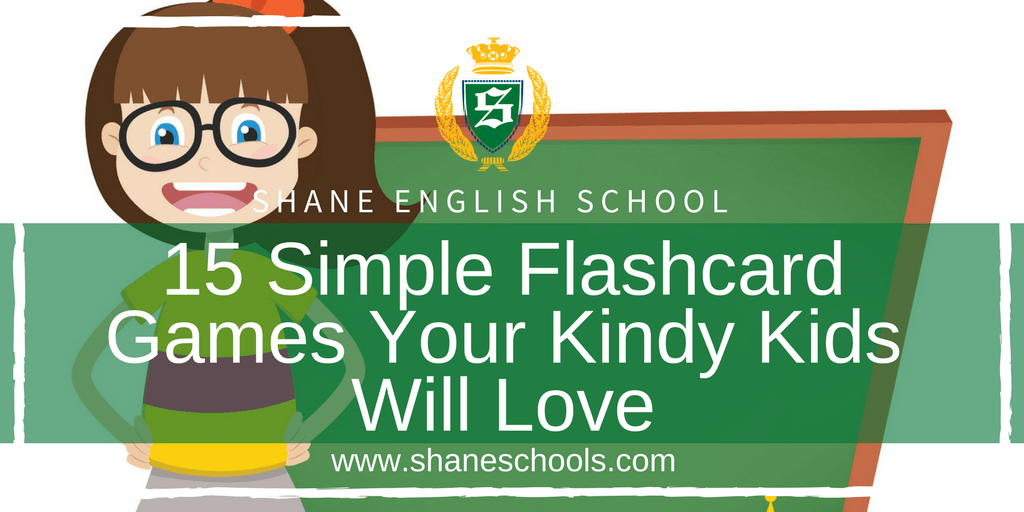 Whether your classroom is equipped with a computer and projector or not, laminated flashcards are a simple, old-school, and excellent tool to get your students engaged and learning. Perhaps the best thing about them is the unlimited ways you can use them!

If you think flashcards are boring or if you are looking for some new games to spice things up, then you have come to the right place. Flashcards are very versatile and don’t have to be used solely for drilling, as you will shortly see. With this age group, as long as you are excited, they will be too!

Line the flashcards in a straight row with space in between on the floor. Depending on your class size, you can either have one student or one student on each side of the line. Have students jump and say the flashcard they land next to. Students hop along saying each card. You can change things up by making it a race or laying out a circle instead.

Use the flashcards so that you know which word to say and to show students if they are correct. Silently mouth the vocabulary word. Make it as exaggerated as needed.

Having the flashcards facing down and away from you, start low and raise the flashcard above you head quickly so that the image shows but only for a second. Students try to guess what it is they saw. You can do this in different ways to make it more exciting, such as from side to side and a simple flash turnover.

Opposite to Fast Flash is Slow Reveal. Use a blank or piece of coloured paper to cover the flashcard. Slowly slide the cover paper to reveal only a small part of the flashcard at a time. Students can shout out and guess what it is.

A personal favourite, this game will liven up any class. Hold the flashcard in front of you and squat down. Whisper the vocabulary word. Rise up slightly. Say the word quietly, Rise up more. Say the word in a regular voice. Continue on until you when you hold the card over your head and are standing straight up the students shout the word.

Have students make a line with an arm length’s space in between each child. Two lines work well after the kids are used to the game and therefore can do it as a race. Give the flashcard to the first person in line. Still facing forward, he/she passes the card over his/her head to the child behind. That child then passes the card through his/her legs to the next person in line.

This one is simple but effective. Have students sit in a circle. Show them a flashcard and say the word. Pass it to the kid sitting next to you and encourage him/her to say the word and pass it to the next person. For larger groups, you could have two or three cards going around at once.

This works well if you have a giant die. (You can make one out of cardboard and tape to use for different activities in all your classes.) Put the numbers 1-6 on the board and a different flashcard or the vocab word next to each number. Each student gets a chance to toss the die up. The number it lands on is the card they say out loud.

Have students sit in a circle. Give random students a flashcard: one for every 3 or four students you have in your group. Play some music. As it plays, students pass the cards around. When you pause the music have the kids who have the flashcards stand up and say what they have.

Have two students stand back to back. Give them each a different flashcard to hold facing out and away from them. When you say go, they walk three steps, turn to face each other and say what the other student has. You can make it competitive with older kids in your other classes.

You will need the picture flashcard and the written word card for this game. This will only work if you have worked on word recognition with your kindergarteners. If you aren’t already familiar with Memory this is how it works: Lay all cards facedown on the floor. Students take turns to flip over two cards in hopes that they get a match. If not, they are flipped back down for the next person to try.

Say It Fast, Say It Slow, Say It High, Say It Low

If you are a kindergarten teacher, then it’s assumed that you aren’t afraid of being silly. Play with your voice as you say the flashcard word. Students should repeat the word how you say it. They will have a ball!

Lay out flashcards on the floor, or display them on the board. After going over them, ask students to close their eyes. Remove one card. Students open their eyes and say which card is missing.

Put chairs in a circle facing outwards. Tape a flashcard to the back of each chair or put them on the ground underneath each chair. Have students make a circle on the outside of the chairs. At this age, there is no need for there to be one less chair than the number of students. Some groups will have more fun if it is not as competitive. Play music and have students walk around the chairs. When you pause the music, students find a seat to sit in. They say the flashcard word on the chair. If the students know actions and movements, make it more exciting by telling them to jump, tiptoe, walk, swim, etc. around the circle of chairs.

Another oldie but goodie. Lay out the cards on the floor or put up on the board so the kids can reach them. Decide whether to call one or two students up at a time. When you shout out a word, they should hit it with their hand.

Want more like this? Visit our Teaching Tips blog. Or if you want to share some helpful hints with your students, check out our Language Learning Tips.

Yvette Smith is an English teacher currently in Vietnam. She has taught in China and Mexico as well. She enjoys writing about the ESL field and thinks everyone should take the chance to travel abroad at least once in their lives.